The year was 1862. Gaston Tessendier, a son of French noble by blood, newly acquired Buisson as well as other land and plots of vines to create the Tessendier family estate. He tenderly cultivated the family vineyards with the sole ambition of creating outstanding eaux-de-vie from 1880 onwards.

His single-minded ambitions grew on his son, Claude Tessendier, and soon, it was his turn to take over. Claude started the art of distillation and ageing of cognacs. He learnt and refined his methods over the years before passing his skills to his son, Jean Claude Tessendier.

The Birth of Cognac Park

In 1993, Jérôme met the intrepid and visionary Dominic Park, a Scottish man who newly discovered the lands of Cognac. Park wanted to create an exclusive, crafted cognac bearing his name and expressed his wish to work with Distillerie Tessendier.

Jérôme agreed to collaborate with Dominic Park and Cognac Park was born. At the request of Dominic, Jérôme created tailor-made blends, using only the finest and most complex of eaux-de-vie. Cognac Park became the pioneers of “made to measure” cognacs or “Craft Cognacs”.

The collaboration lasted until 2008, when Dominic Park passed on. Distillerie Tessendier became the owners of Cognac Park after that.

The Cognac Park Collection is a series of cognac that comes from different regions. Each of them is carefully crafted to represent the best that they should. Each Cognac Park expression is 100% organic, making it a natural cognac that is safe for everyone.

The Cognac Park range uses the white grape, Ugni Blanc variety. It comes from vineyards found in the Petite Champagne, Grande Champagne, Fins Bois and Borderies regions. They produce fresh, full-bodied wine and then distilled them twice in large copper stills at the distillery. The result is a high quality eaux-de-vie.

The various eaux-de-vie are then placed in oak barrels for maturation in the dark cellars at Distillerie Tessendier for the required years before they meet the world in their exclusive bottles and packaging. 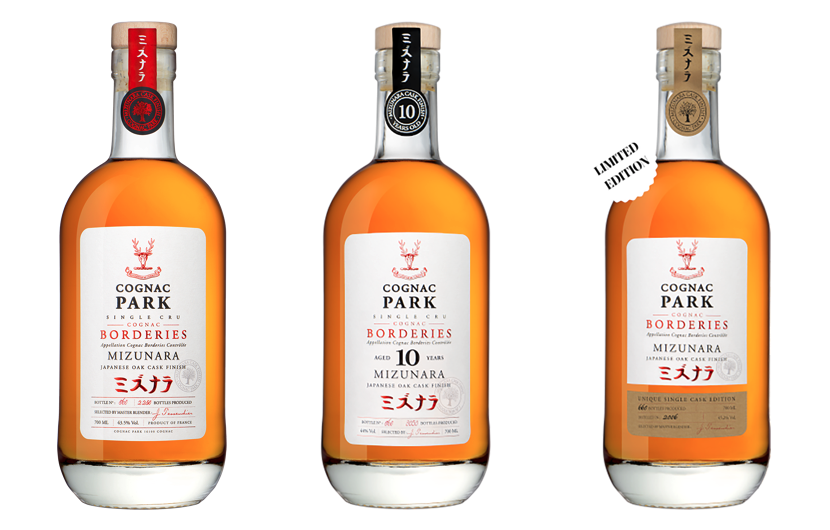 Cognac Park Mizunara is 100% from Borderies, the most exclusive of the six terroir in the French Cognac region. It is characterised by rounded, floral and sweet Eaux-de-vie, with subtle hints of violets. It is carefully crafted to highlight the delightful characteristics that is typical of the best Borderies cognacs.

The Cognac Park Borderies range is “single vineyard” and represents the beauty of the rich and robust flavours of typical Borderies cognacs. It has a pure, delicate and intricate style, featuring the best of their terroirs.

As the latest addition to the family, the Cognac Park Mizunara added a new dimension with a finish in Mizunara cask. As we know, Mizunara oak is a rare varietal of oak from Japan, and the porous wood is used to create unique barrels for ageing premium spirits. The Mizunara barrels enhances the soft, round taste and floral notes of the Borderies cognac, bringing more depth and complexity through the addition of pleasant spice to both the nose and the palate.

The Expressions of Cognac Park Mizunara

Original (Not available in Singapore)

The distillate of the original Cognac Park Mizunara spends four years in French oak barrels of 400 litres. First, it is aged in new barrels for ten months; then it gets a transfer to used casks. Each cask is mainly from the Limousin forest. At the end of the ageing period, the cognac is finished in new Mizunara casks (500 litres in volume) for six months before getting bottled at 43.5% abv.

We no longer bring in the Original as there isn’t a lot of demand for this variant.

Cognac Park Mizunara 10 Years Old goes through a similar process as the Original. The only difference is the ageing period. The distillate spends ten years in French oak barrels of 400 litres before it is finished in new Mizunara casks (500 litres) for nine months. It is bottled at 44% abv.

This will continue to be the main variant available in Singapore moving forward.

Single Cask (SOLD OUT in Singapore)

Single casks for cognacs are hard to come by, and it is the reason why Cognac Park Mizunara Single Cask is so exclusive. The only available single cask Cognac Park Mizunara right now is the 2006 variant. The distillate also spent ten years in French oak barrels of 400 litres before it is finished in new Mizunara casks (500 litres) for six months. It is bottled at 45.2% abv.

Unfortunately, the single cask variant is now sold out. For those who had managed to get hold of a bottle in 2019, congratulations! You now have an unicorn on the shelf!

Cognac Park XO Cigar Blend is a blend of cognacs aged 25 to 32 years old. The dark amber colour of this excellent cognac reveals much of its age. The Cigar Blend consists of 70% Grande Champagne and 30% Petite Champagne, giving the blend a well-rounded floral aromas and vibrant fruitiness.

Park XO Cigar Blend is aged in oak barrels with a capacity of only 350 litres. The medium toast barrels allow the eaux-de-vie to extract aromas from wood with firm tannins, giving it a pleasant spice and a dark chocolate note. Made from 100% Ugni Blanc (white grapes), the eaux-de-vie is refreshing and captures the strength of the terroir beautifully.

The name “Cigar Blend” possibly already tells you that the cognac pairs very well with cigars. Nonetheless, we recommend that Honduran cigars as it pairs especially well. If you are not into cigar, you can pair the Cognac Park XO Cigar Blend with your favourite dark chocolates  or melba peaches.

Park Extra Grande Champage is aged in oak barrels with a capacity of only 350 litres. The eaux-de-vie spends ten months in new barrels and is then transferred to used casks for the remaining years of their ageing. The lightly toasted barrels allow the eaux-de-vie to tease out delicate, sweet flavours from the wood. Expect honey and vanilla custards when you try this. Made from 100% Ugni Blanc (white grapes), the eaux-de-vie is refreshing and captures the strength of the terroir beautifully.

The name “Extra” already hints at the high age of this cognac. It showcases aromatic flavours and gives off an air of perfect grace in the crafted decanter that houses it. The Extra Grande Champagne pairs especially well with Cuban cigars, so cigar smokers will enjoy sipping on the cognac while smoking. Non-smokers can also enjoy the Extra Grande Champagne with their favourite dark chocolates or salted butter caramel. 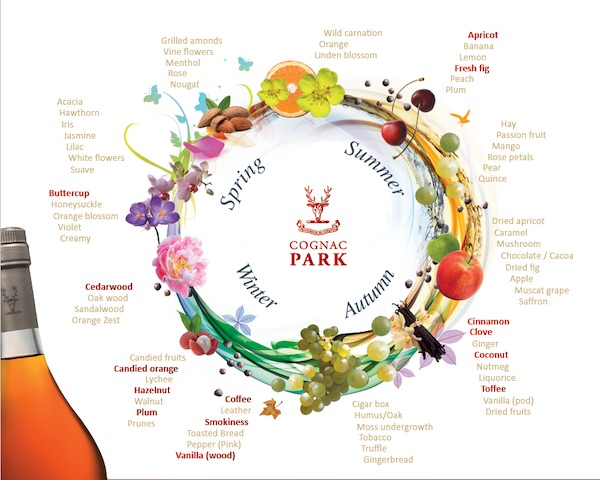 The cognac aroma wheel is not unlike what we used in whisky to find the flavours present in the liquid. Fifty leading chefs, sommeliers, cellar masters, tasting experts and specialist journalists came together to describe and define the rich aromas of cognac, creating the wheel shown above. As you can see, the descriptors are many, and each flavour denotes the complexity of the dram that you have in your glass.

Explore the wheel the next time you enjoy a dram of Cognac Park and see what you get!

How To Enjoy Cognac?

Similar to whisky, there is no “one perfect way” to drink cognac. The best way is always the way that you enjoyed it the most.

If you wish to explore the flavours of the cognac for the first time, you can consider trying it neat using a tasting glass. Get the aromas from the nose and sip it to get the flavours on the palate. Leaving a little in the bottom of the glass and returning to it after a few minutes will open up a host of new aromas, helping you to appreciate the complexity of the dram.

We would, however, highly recommend you to drink the cognac in any way that you like, because that is always the best way to drink it!

Where Can You Find Cognac Park in Singapore?

Spirits Castle is proud to be the official distributor for Cognac Park Mizunara in Singapore and South East Asia. You can find these excellent cognacs at our bar and restaurant partners.

Check out our list of partners and remember to make a booking with them before heading down with 8 pax and below.

You can buy a bottle or two from Spirits Castle web store if you prefer to drink with your friends in the comfort of your own home.